SkysenxHub’s TechCamp is our summer training platform for kids and teens during holidays where we introduce them to different technologies that will help shape their career paths. It is an annual event aimed at inculcating kids and teens with the technological skills required in the 21st century. Participants learn from basic technological concepts, to designing and building electronic circuits and programming the same. Started in 2019, our maiden edition which ran for 5 weeks was rewarding in both knowledge and fun.

Our 2022 edition which commerces August 1st, 2022 promises to be much bigger and better, introducing more training programs to accommodate more areas of interest and improving on existing ones. We have also introduced a bus shuttle service to ease the stress of transporting participants back and forth from their various homes. 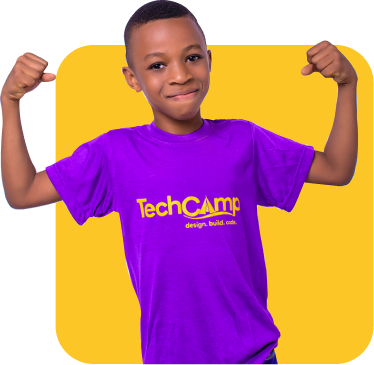 Check out our Training Camps

At the end of the training, participants will have firm knowledge about Artificial Intelligence and Machine Learning, and deploy the same to solve problems. Participants will have access to deploy and test applications such as Facial Recognition, Object Detection, chatbots etc.

Our Web Development camp introduces participants to coding via a technology they are already familiar with - the World Wide Web. There’s been a lot of buzz about coding of late. Alongside maths and reading, coding is an essential skill considering our ever-growing digital World, Unfortunately, only a few students have the opportunity to learn to program because it is rarely taught in schools. Because programming allows us to take a complex problem, understand the problem, and develop possible solutions, learning to code is beneficial no matter what your career ambitions are.

The Web Development community boasts of over 18m Developers spread across different countries. Whether you are a beginner or learning a new technology, this community will assist you in your journey.

At the end of the training, participants will know how the everyday website they interact with works and build basic websites with images, colours, tables, etc. Participants will build and deploy a personal website as a testament to what they have learned.

At the end of the training, participants will have enough knowledge about design and how things are made from idea stage to finish product. Participants will design, print custom parts, t-shirt swags as a testament of what they have learned.

Our Programming & Animations Camp using Micro Bit introduces participants to the art of Computer Programming and Animations. Participants learn how to use the Microsoft MakeCode platform which brings computer science to life for all students with fun projects, immediate results, and both block and text editors for learners at different levels. We also teach participants how to program the Micro Bit directly using the MicroPython programming language.

The Micro Bit (also referred to as BBC Micro Bit, stylized as micro:bit) is an open source hardware ARM-based embedded system designed by the BBC for use in computer education in the United Kingdom. The device is described as half the size of a credit card and has an ARM Cortex-M0 processor, accelerometer and magnetometer sensors, Bluetooth and USB connectivity, a display consisting of 25 LEDs, two programmable buttons, and can be powered by either USB or an external battery pack. The device inputs and outputs are through five ring connectors that form part of a larger 25-pin edge connector.

The Micro Bit was designed to encourage children to get actively involved in writing software for computers and building new things, rather than being consumers of media. Children love to see things happen which makes learning programming with the Micro Bit device fun and rewarding in knowledge.

Each participant gets a complete kit of Micro Bit which includes the Micro Bit itself, a battery pack, a usb cable to upload software and a pouch for convenience.

Our Kids Camp introduces participants from age 8 and above to the world of technology through Robotics and Programming using Scratch. They will practice building robots with stem kits. They will learn Programming using Scratch, a block-based visual programming language targeted primarily at children. With Scratch, you can program your own interactive stories, games, and animations. Scratch helps young people learn to think creatively, reason systematically, and work collaboratively — essential skills for life in the 21st century.

Any child from age 8 and above most especially those with great enthusiasm towards technology and her applications.

Are the kits free?

Yes. The Robotics & Micro:Bit Program requires kits which are already included in the Fee. Participants are only required to come with a laptop.

My child is less than 8, Can he/she still attend?

We try as much as possible to accept kids and teens who show great enthusiasm towards technology and her applications. If you think your child is tech savvy, we may consider admission for him or her.

Is there any interview or exam prior to admission?

Yes. You will be required to come with your ward for an in-person interview. After the interview, we'll help choose a program that suits your ward.

How long is the TechCamp?

The TechCamp will run for 5 weeks, Monday - Friday with Wednessdays for special classes were all participants are combined. From 9am - 1pm daily. There’s a break period of 1 hour each training day, from 11:00am to 12:00am.

Will Internet Service be available?

Yes. Internet service will be provided to participants throughout the TechCamp. They will be under constant supervision by the TechCamp team to avoid abuse and unwanted exposure.